Wayne Tisdale, Canadian Palladium’s CEO, commented “Our drilling program has continued to increase the size of the East Bull Deposit. We have decided to include the palladium mineralization intersected by these successful holes along with additional holes on the west side of the Property in in our updated Resource Estimate. Consequently, the updated Resource Estimate will now be released in February 2022.”

The current results are part of a 20,000 m drill program with a primary objective of expanding the current Inferred Resource and discovery of new mineralization.  See Figure 1 showing the hole locations.

The Valhalla Zone palladium mineralization is primarily hosted within a 45-degree-north-dipping vari-textured melagabbro unit near the basal contact of the East Bull gabbro.  Drilling has successfully focused on testing the strike and downdip extensions of this contact-type mineralization that is typically tens of metres thick.

The diamond drill holes were all drilled at an azimuth of 180o with inclinations of -60o.  Reported widths are drilled widths.  True widths estimated to be 90% of the intersections for the Valhalla Zone.  In addition to results reported here, rhodium is being analyzed and will be reported at a later date.

Metallurgical test work program – The Company is also pleased to report that a metallurgical test work program on the East Bull Palladium Deposit is in progress.  The primary purpose of the metallurgical study is to characterize the sulphide mineralogy, and evaluate potential metal recoveries and concentrate quality for the East Bull Deposit.  Two representative 40 kg test samples of the platinum group metal-copper-nickel mineralization from recent drill core obtained from each of the Valhalla and Garden Zones are being processed by SGS Canada Inc. of Lakefield, Ontario (SGS).

This is the first metallurgical study of the Company’s East Bull Deposit.  A mineralogical study completed for a previous operator identified the major sulphide minerals as pyrrhotite, chalcopyrite, pentlandite, and pyrite with associated platinum group minerals (PGM) and native gold.  The PGM include kotulskite (PdTe), froodite (PdBi2), merenskyite (PdTe2), michenerite (PdBiTe), sperrylite (PtAs2), platarsite (PtAsS), and hollingworthite (RhAsS).  Since the PGM are closely associated with the major sulphide minerals, flotation of a sulphide concentrate is being evaluated to recover precious metals.

SGS has completed feed characterization studies including head assays, sulphide mineralogy, Bond abrasion and ball mill tests. The flotation testing will consist of batch rougher and cleaner tests to evaluate recovery and concentrate grade expectations.  The metallurgical study is well advanced.  The results are expected in Q1 2022 and will be the subject of a future press release.

Wayne Tisdale further stated that “Canadian Palladium is pleased to be advancing the East Bull Project to the stage of metallurgical test work.  This clearly represents a transition in our exploration program as we move from definition drilling to evaluating the development of this significant palladium resource.”

Drill Program QA/QC – This phase of the drilling program was carried out under the supervision of Garry Clark, P. Geo., of Clark Exploration Consulting, a Qualified Person as defined in NI 43-101.  Drill core samples were split using a rock saw by Company staff, with half retained in the core box and stored in the Company’s facility in Massey, Ontario.  The drill

core samples were transported in sealed bags by courier to Activation Laboratories (“Actlabs”) in Ancaster, Ontario.  Actlabs is an independent ISO/IEC 17025 certified laboratory.  PGE analysis was performed using a 30 grams fire assay with an ICP-MS or ICP-AES finish. Multi-element analyses, including copper and nickel were analysed by four acid digestion using 0.25 grams with an ICP-AES finish.  Certified standards, blanks and crushed duplicates are placed in the sample stream at a rate of one QA/QC sample per 10 core samples. Results are analyzed for acceptance at the time of import. All standards associated with the results in this press release were determined to be acceptable within the defined limits of the standard used.

Mr. Garry Clark, P. Geo., of Clark Exploration Consulting, is the “Qualified Person” as defined in NI 43-101, who has reviewed and approved the technical content in this press release.

The Canadian Securities Exchange has not reviewed and does not accept responsibility for the adequacy or accuracy of the content of this news release.

No securities regulatory authority has either approved or disapproved of the contents of this news release. The securities being offered have not been, and will not be, registered under the United States Securities Act of 1933, as amended (the “U.S. Securities Act”), or any state securities laws, and may not be offered or sold in the United States, or to, or for the account or benefit of, a “U.S. person” (as defined in Regulation S of the U.S. Securities Act) unless pursuant to an exemption therefrom. This press release is for information purposes only and does not constitute an offer to sell or a solicitation of an offer to buy any securities of the Company in any jurisdiction.

This press release contains forward-looking information based on current expectations, including the proposed use of proceeds from the private placement. These statements should not be read as guarantees of future performance or results. Such statements involve known and unknown risks, uncertainties and other factors that may cause actual results, performance or achievements to be materially different from those implied by such statements. Although such statements are based on management’s reasonable assumptions, Canadian Palladium assumes no responsibility to update or revise forward-looking information to reflect new events or circumstances unless required by law.

Figure 1.  Drill intersections reported in this release relative to the East Bull Palladium Deposit.  Base map is an airborne total field magnetic survey. 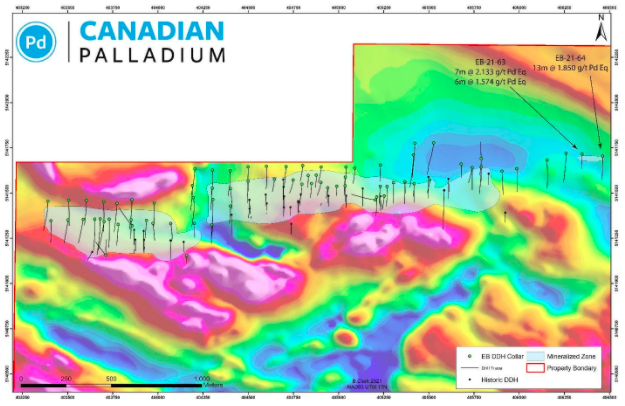