The MT method is an electromagnetic geophysical method with excellent depth penetration and is capable of detecting disseminated sulphide mineralization associated with the high palladium tenor sulphides found on the Company’s East Bull Property.

Target Models – The palladium exploration targets at the East Bull Project include:

The MT method has recently been used to successfully target discrete, low resistivity Palladium rich zones at Sunday Lake, Ontario (https://impalacanada.com/investors/news/news-details/2019/North-American-Palladium-Announces-Major-Expansion-to-Sunday-Lake-PGM-Zone-and-Best-Drilling-Results-to-Date/default.aspx). Results from the current survey indicate that there is a response to known surface mineralization at East Bull and major structural features such as the Folson Deformation Zone.  This demonstrates the effectiveness of the MT method for these target models.

Survey – Data for the Spartan MT survey was completed by Quantec Geoscience in early May 2020.  The Company participated in Line 1, a 4.5 km line oriented at 060o that was part of a larger survey completed for Grid Metals Corp.  Approximately 2 km of Line 1 was on the Company’s property.

Results – Analysis and interpretation of the MT survey results was completed by Mr. Kevin Stevens of Stevens Geophysics Inc.  A section of the 3D inversion (Figure 1) of the SW part of MT Line 1 on Canadian Palladium’s East Bull Property shows the colour contoured resistivity ranging from low of <1,000 ohm-m (orange) to high of >10,000 ohm-m (blue).  The section shows the Valhalla Palladium Deposit with previous drill holes as an area of lower resistivity.  The Valhalla Deposit actually dips to the north, with the MT section showing a shallow apparent dip to the NE due to MT Line crossing the deposit at an oblique angle.  The Folson Deformation Zone (FDZ) is associated with the truncation of the resistivity low associated with the potential extension of the Valhalla Deposit.

Drill Targets – Prospective targets are defined by resistivity lows.  Targets at depths of less than 500 m are amenable to drill testing in the current program.  Target 1 on Figure 1, potentially represents a down dip extension of the Valhalla Deposit to a depth of approximately 300 m which is considerably deeper than previous drilling.  Target 2 is an area of lower resistivity located at 400 m depth and is southwest of the Valhalla Deposit.  This may be related to a conductor located south of the Valhalla Deposit that was identified in a 2007 VTEM airborne survey by previous operators.  The location of a Maxwell conductive plate model for a bore hole electromagnetic anomaly (BHEM plate) in hole ME-00-19 is also shown.  This BHEM plate also corresponds with the VTEM conductor.  Target 2 may be located near the base of the East Bull intrusion or in mafic metavolcanic host rocks.

Mr. Wayne Tisdale, CEO, commented, “Canadian Palladium is currently drilling at East Bull.  We plan to test these new, high-quality MT drill targets that have the potential to significantly expand the palladium resource on this project.  The new targets are relatively shallow with depths of less than 500 m and we will have an opportunity to test them during the current drill program.  We look forward to some exciting results from this drilling.”

Mr. Garry Clark, P. Geo., of Clark Exploration Consulting, is the “Qualified Person” as defined in NI 43-101, who has reviewed and approved the technical content in this press release. 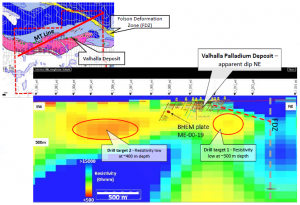 Neither the Canadian Securities Exchange nor its Regulation Services Provider accepts responsibility for the adequacy or accuracy of this release.